We will do what the other guys cannot!

The violent weather that can occur on Lake Superior combined with the rocky, shallow shoals between the islands has made the Apostle Islands a historically difficult area for ships to navigate. To provide safer travel for ships lighthouses were build throughout the islands. Most are open to the public, and tours are offered by the National Park Service.

Michigan Island is the home of two lighthouses, both currently managed under the NPS and open to visitors between the hours of 9:00 and 11:00 am, and 1:00 pm and 4:00 pm. The older of the two was originally planned for Long Island, however, a change of plans called for it to ultimately be built on Michigan. This lighthouse was in service only a year before it was closed. More than ten years later, this first lighthouse was refurbished and again put into use. The second and taller lighthouse was originally locate near Philadelphia, but was disassembled and brought to the island.

The most remote and exposed of the Apostles, Outer Island, on its northernmost end, is home to a lighthouse built in 1874. This lighthouse is frequently exposed to harsh weather and gales. The islands exposed location requires that weather and wave conditions be co-operating to reach the dock by boat. A hiking trail is available from the southernmost tip to the lighthouse and other sights on the island. It is approximately 7 miles from the south end to the north end along this trail. A half buried boat wreck can also be seen along the south-west beach of the southern sandpit.

Devils Island lighthouse was the last to be built and the last of the Apostle Islands' lights to remain fully manned and not automated. Devils lighthouse is a popular destination for kayakers and tours are offered by NPS during the tourist season between 9:00 and 11:00 am, and 1:00 pm and 4:00 pm.

The most striking of all the Apostle Islands lighthouses, the light on Raspberry Island served as both a beacon as well as a home for the keepers and their families that worked to ensure that travel throughout the islands remained safe. It is located on the southern end of Raspberry Island, and can be toured during the summer season from 9:00 am to 4:00 pm.

This lighthouse was built in 1881 out of the local brownstone instead of brick. The design of it is based on three other lighthouses with a similar Gothic style. The lighthouse had a keeper for almost 30 years on in 1921 in became an automated tower. Tours are available in the summer between noon and 4:00 pm. 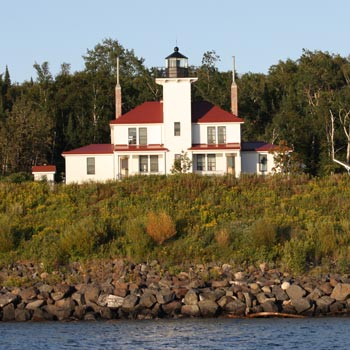 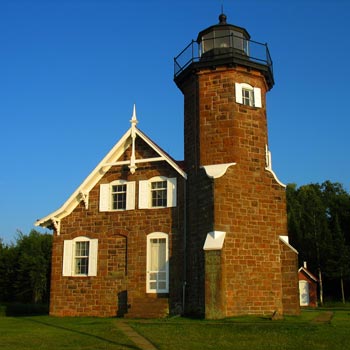